These are CPU instruction sets. Mostly you dont have to worry about it, the default is fine, but Ive been meaning to add something to the docs about it due to some recent changes.

Basically, a given Android device might have an arm or an x86 cpu (or even something else but thats not important), these are just different architecture types from different manufacturers. Arm cpus are most common, but x86 is not unusual. When you compile code, the output depends on the architecture target. When you build a Kivy app, you specify one of the architectures and then the app will only work on that type of the device. If you want to support all devices, you can compile multiple APKs to distribute – the Play store will let you upload more than one, and will send each device the right one.

Within a given architecture type there are multiple versions. armeabi-v7a is the older target, for 32 bit arm cpus, almost all arm devices support this target.
arm64-v8a is the more recent 64 bit target (similar to the 32-bit -> 64 bit transition in desktop computers). I think most new devices are 64 bit, but not sure. arm64-v8a devices can run code compiled against armeabi-v7a, its backwards compatible.

As of later this year, the Play store will require you to upload an arm64-v8a APK as the minimum, because this gives the best support for newer devices. You will also be able to upload other APKs to support other device types.

That isnt quite the full story: some x86 devices have a special library that lets them run code compiled for arm devices. Im not sure how widespread this is, but it seems pretty common.

For your app issue, use adb logcat to see whats wrong.

To be clear, these are not instruction sets. They are ABIs, which compile into instruction sets. Most devices today are arm64-v8a, the really cheap devices are armeabi-v7a to save cost, and almost none are x86 or x86_64. 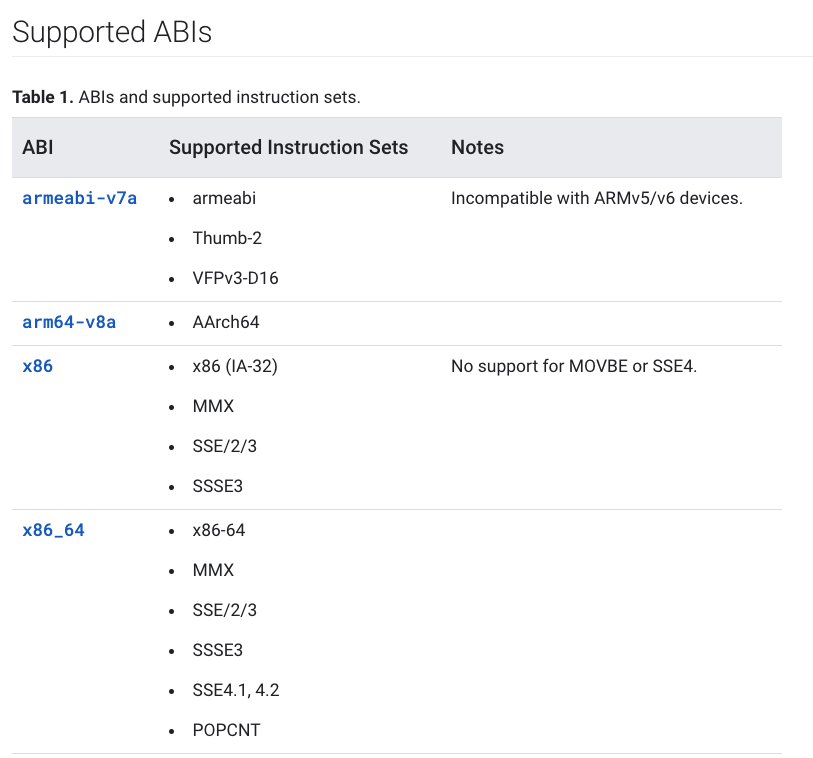 Each combination of CPU and instruction set has its own Application
Binary Interface (ABI). An ABI includes the following information:

The CPU instruction set (and extensions) that can be used. The
endianness of memory stores and loads at runtime. Android is always
little-endian. Conventions for passing data between applications and
the system, including alignment constraints, and how the system uses
the stack and registers when it calls functions. The format of
executable binaries, such as programs and shared libraries, and the
types of content they support. Android always uses ELF. For more
information, see ELF System V Application Binary Interface. How C++
names are mangled. For more information, see Generic/Itanium C++ ABI.
source